Sports Lovers were particularly distressed during the whole coronavirus disaster as all of their activities including their viewership of their favourite sport had come to a halt. And There was nothing that they could do about that, other than to hope and pray. However, God has been very kind to us all, as situation improved all across the world during the past six months.

And here we are, staring at the FA cup final, which is only a fortnight away now. While the whole English Footballs grassroot setup is a complex one, it is the FA cup that binds and brings all these teams from different regions, backgrounds and levels, closer. It symbolizes all the flamboyancy of the English Football by painting its true picture of diversity, integrity and union.

It is important to know about all the fun facts, functioning and rich history of the competition, before we proceed to the finals this year.

FA cup is a Premier event in English Football Season, which is played over an extensive period.

FA cup stands for “Football Association” cup. It is an annual knockout football competition, which was first played during the 1871–72 season. It is the oldest national football competition in the world. It is organised by and named after The Football Association. Since 2015, it has been known as The Emirates FA Cup after its headline sponsor. A concurrent women's tournament is also held, the Women's FA Cup.

The competition is open to any eligible club down to Level 10 of the English football league system. These include all 92 professional clubs in the Premier League (level 1) and the English Football League (levels 2 to 4), and several hundred non-League teams in steps 1 to 6 of the National League System (levels 5 to 10).

A record 763 clubs competed in 2011–12. The tournament consists of 12 randomly drawn rounds followed by the semi-finals and the final. Entrants are not seeded, although a system of byes based on league level ensures higher ranked teams enter in later rounds – the minimum number of games needed to win, depending on which round a team enters the competition, ranges from six to fourteen.

The scheduling of the tournament which runs all year long is a tight one. Beginning in August, the competition proceeds as a knockout tournament throughout, consisting of twelve rounds, a semi-final and then a final, in May. A system of byes ensures clubs above Level 9 and 10 enter the competition at later stages. There is no seeding, the fixtures in each round being determined by a random draw. Prior to the fifth round, fixtures ending in a tie are replayed once only.

The system is a complex one and comprises of several levels and rounds of competition. The first six rounds are the Qualifying Competition, from which 32 teams progress to the first round of the Competition Proper, meeting the first of the 48 professional teams from Leagues One and Two. The last entrants are the Premier League and Championship clubs, into the draw for the Third Round Proper. In the modern era, only one non-League team has ever reached the quarter-finals, and teams below Level 2 have never reached the final. As a result, significant focus is given to the smaller teams who progress furthest, especially if they achieve an unlikely "giant-killing" victory.

Winners receive the FA Cup trophy, of which there have been two designs and five actual cups; the latest is a 2014 replica of the second design, introduced in 1911. Winners also qualify for the UEFA Europa League and a place in the upcoming FA Community Shield.

Arsenal are the most successful club with 14 titles and Arsène Wenger is the most successful manager in the history of the competition, having won seven finals as Arsenal's manager. Sadly, the defending champions have not been able to make the finals this year.

However, Last years defending champions Chelsea are still in the hunt as they will compete against Leicester on Saturday, May 15,2021.

Both the sides have gone through tough phases but yet have managed to make their way to the final. Chelsea has beaten the expected Premier League Champion Manchester United by a margin of 1-0 while Leicester City managed to win against Southampton by the same margin. The final will begin at 17:30 BST.

Interestingly, Semi Finals and Finals are played at the same venue, which often is Wembley Stadium, London.

As the two sides gear up for the final, Chelsea may have an upper hand since they managed to beat Manchester City, the toughest side in the competition. Yet the game is expected to be a thriller of all sorts since both sides look really competitive.

Making predictions about the result of the final will not be a wise thing. Yet it seems quite certain that these sides will be able to put on an exciting display of gameplay in the all important final. While the glittering, glossy trophy of the FA cup is all to play for, both the sides will also love to compete in the FA shield competition. FA shield event is a match between the winners of two most prestigious competitions in the English football setup. These include Premier League Champions and FA cup Champions.

While we cannot predict, which side will celebrate with the trophy, you can have trophies for your own self if you want. 1stPlace 4 Trophies brings its all new exciting collection of trophies for you, which are here to inspire and guide you through this period of stress.

You can make the right call for your own local competitions played with equality and equity in the true spirit of the game by purchasing highly affordable trophies at 1st Place for Trophies. We encourage the existence of the sport, in its true spirit and to support that we offer a variety of glamorous, glorious, glossy and glittering glass trophies and medals for football. 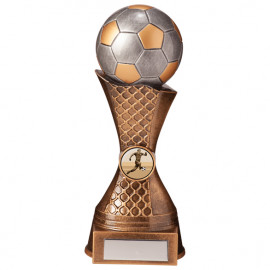